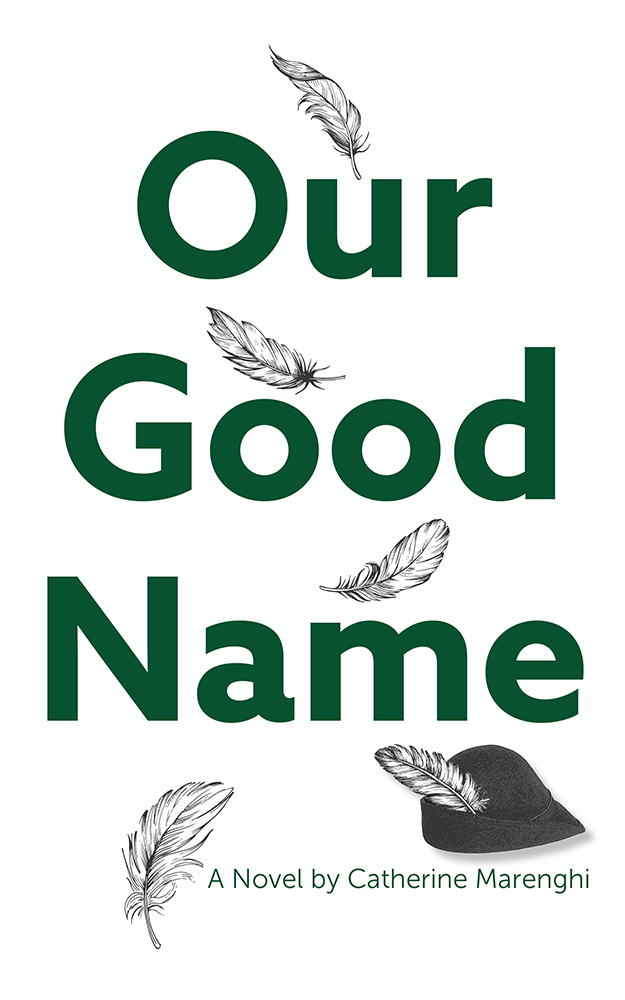 Our Good Name is the story of northern Italian immigrants who leave behind their beloved Apennine village in the 1890s to find their place in a strange new country. From the squalid transatlantic voyage to the shock of Ellis Island to the gritty factory town of Milford, Massachusetts, it is a tale of struggles, hardship, and heart-wrenching losses. The early 20th century is also a time of tectonic social upheaval, including deadly labor union strikes, intense anti-immigrant sentiment, and the infamous trial of their Milford neighbor Nicola Sacco.

Framed as a series of stories told in many voices, this engaging historical novel surprises the reader with a rarely told side of the Italian-American experience, the hard realities of immigrant life, and the courage required to make a home of one’s own in the New World.

“Catherine Marenghi has listened with a finely tuned ear to voices long past, to striving women and men, immigrants and seekers, and she has breathed a richly imagined life into forgotten souls. Speaking with many voices, sometimes plain-speaking, sometimes lyrical and profound, Catherine has crafted a brilliant coloratura.”

– Jennifer Clement, author of Prayers for the Stolen, Gun Love, and Widow Basquiat

“As a child from an immigrant family and community, I felt a visceral, powerful connection with the vivid characters and experiences in ‘Our Good Name.’ Now as ever, it is an important, universal tale that keenly captures the sorrow of leaving behind a beloved country, the harsh realities of the New World, and the heart-rending longing for home. ‘Our Good Name’ is an evocative and fresh take on the timeless immigration story rendered with broad strokes of grief and joy, and occasional flecks of humor.”

– Richard Blanco, poet, author of The Prince of Los Cocuyos: A Miami Childhood and inaugural poet for Barack Obama

“ ‘We are a nation of immigrants.’ Now that I have read Catherine Marenghi, I finally know what that means. Our Good Name is a meticulously researched and sensitively told story of an Italian family who built one little corner of America. We’re with them. We hear their conversations and feel their joy and pain. With a journalist’s ear for dialogue, a poet’s gift for description, and a historian’s perspective for what matters to community and country, the author guides us through the gardens and kitchens and rice fields of their old world, into steerage on the way to their new world, and among the fields and schools and factories and often-unwelcoming towns and courts of law of their adopted land.”

— Tom Burke, author of Evil Must Not Have the Last Word: The Life of Mary Wygodski

“Catherine Marenghi has taken the bare bones of her ancestors’ immigrant experience and fleshed them out into richly imaginative stories that vividly capture the poignant, heart-wrenching, flinty, brave, and heroic lives of the Italian people who found a new home in Milford, Massachusetts.  In doing so, Marenghi has turned a little-known corner of New England into an emblem of the American immigrant experience.”

– Philip Gambone, author of As Far as I Can Tell: Finding My Father in World War II